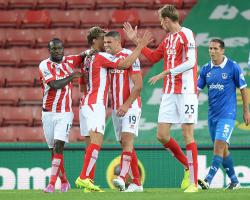 Stoke 2-1 Swansea: Match Report - view commentary, squad, and statistics of the game as it happened.Walters earns Stoke winJonathan Walters' first Barclays Premier League goal of the season completed a come-from-behind 2-1 victory for Stoke against Swansea at the Britannia Stadium.Walters beat Lukasz Fabianski with a nicely executed header from fellow substitute Oussama Assaidi's cross in the 76th minute after each side had scored a contentious penalty in the first half