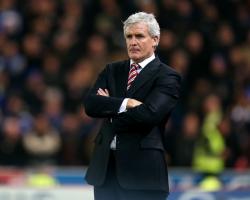 Stoke 1-1 Man Utd: Match Report - view commentary, squad, and statistics of the game as it happened.United get stuck at StokeManchester United's faint Barclays Premier League title hopes receded even further as they began 2015 with a disappointing 1-1 draw at Stoke.Ryan Shawcross scored inside two minutes to give Stoke the lead against his old club, but Radamel Falcao scored his third league goal to give United a point.Manager Louis van Gaal said over the festive period that United were still aiming to top the table at the end of the season, but their recent form on the road means they are now in danger of slipping even further behind Chelsea and Manchester City.Although Van Gaal has gone 10 matches unbeaten, his men have drawn their last three on the road - that is not title-winning form, and the former Bayern Munich manager is experienced enough to know that.His team could have come away with nothing from this New Year's Day encounter at a blustery Britannia Stadium.Peter Crouch hit a post in the second half and the former Tottenham striker felt he should have been awarded a penalty when his header struck Chris Smalling's arm.That was just one of a number of decisions that infuriated Stoke manager Mark Hughes, who came to the edge of his technical area to shout at referee Michael Oliver on several occasions.Mame Biram Diouf, who managed to score just once in a two-and-a-half-year spell at United, wasted a glorious chance to put Stoke 2-0 up after an error by Jonny Evans, who had a shaky game at centre-back.Despite a stellar cast of forwards including Wayne Rooney, Falcao, Juan Mata and Robin van Persie, United rarely looked threatening on the attack.A clever second-half volley from Van Persie was the closest they came to adding a second goal.Van Gaal gave United Christmas Day off to prepare for their Boxing Day game against Newcastle, but he ordered his players in for training on New Year's Eve.The United manager was determined to start 2015 with a bang and on the eve of the match, he told his players to go to bed dreaming of beating Stoke.Van Gaal's men failed to wake from their slumber in time for kick-off though as the Potters caught the visitors napping early on.Just 109 seconds into the match, Hughes' team went ahead.Crouch headed Marko Arnautovic's corner goalwards and Shawcross, the former United trainee, was there to guide the ball home.Van Gaal rose to his feet and looked concerned about his team's start.United lacked pace, rhythm and cohesion in attack

Shawcross kept Van Persie quiet and the best effort Van Gaal's team could muster at the other end was a Rooney free-kick that sailed six feet over the crossbar.Diouf exposed the visitors' defensive troubles when he dispossessed a nervous Evans and looked down on goal, but he curled his shot high and wide.Evans wobbled again when Crouch challenged him for a long ball, but referee Oliver felt the former England striker had fouled the United centre-back.Then, completely out of the blue, United equalised

Michael Carrick ran to the near post and flicked on Rooney's corner to Falcao, who skilfully tapped in from close range.Falcao had previously struggled to keep up with the pace of the game, but now he was tracking back and grafting for his team-mates.The Colombian went over the top on one occasion, fouling Shawcross and leaving his boot in for good measure

Stoke failed to capitalise from the resulting free-kick though as Geoff Cameron glanced Arnautovic's cross wide.United started the second half poorly

There were too many attempts at complicated passes and threaded through-balls that did not come off, thanks partly to the heavy rain that was now falling on the uneven surface.Oliver started to lose his grip on the game too as a few rash challenges flew in from both sides.Hughes came to the edge of his technical area - not for the first time - and yelled at the referee for giving a foul against Marc Muniesa, who tangled with Falcao on the edge of the box.Stoke were adamant they should have had a penalty when Crouch's header struck Smalling's outstretched arm

Oliver was two yards away, but decided against giving a penalty despite Stoke's protests.Van Gaal brought Adnan Januzaj and Ander Herrera on for Luke Shaw and Falcao, which allowed Rooney to move up front.A thrilling 10-minute period ensued, with both teams going for the win.Mata lobbed the Stoke defence to find Van Persie, who chested the ball down and volleyed just wide.At the other end, Crouch hit the woodwork from Arnautovic's corner and Diouf's deflected volley flew inches wide.Rafael came on for Ashley Young, who pulled up with an injury.Stoke substitute Oussama Assaidi raced past Phil Jones in injury time, but he curled his shot into David de Gea's arms and the hosts had to settle for a draw