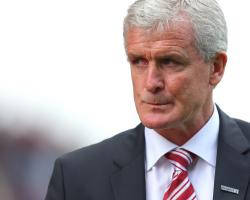 Stoke 1-0 Newcastle: Match Report - view commentary, squad, and statistics of the game as it happened.Pardew's Magpies beaten at StokeThe pressure on Newcastle manager Alan Pardew cranked up as his side were beaten 1-0 by Stoke at a rain-drenched Britannia Stadium.Ahead of this match Magpies owner Mike Ashley - who the club insist was joking with the comment - said Pardew would be "finished" if it ended in defeat.And, certainly, it will be interesting to see what the future now holds for Pardew after a performance from the Tyneside outfit that hardly supported the case for him to keep his job, and was watched by Ashley from the stands.Newcastle - several of whose fans held up 'Sack Pardew' signs throughout the contest - were slow to react at the back as Peter Crouch headed in from the lively Victor Moses' cross in the 15th minute.And while there were other moments of defensive uncertainty from the visitors, they rarely looked like finding an equaliser, with Potters goalkeeper Asmir Begovic only really being called upon to make one decent save, keeping out Daryl Janmaat.Jack Colback came close to levelling late on, but struck the bar from close range.Stoke might have had a penalty in the first half when Yoan Gouffran bundled over Moses, and substitute Marko Arnautovic then hit the post early in the second half.Overall, Mark Hughes' team were value for what were their first points at home in the Barclays Premier League this season and takes them from 17th up to 11th.Newcastle, meanwhile, stay second-bottom and without a league victory this term

They have won only once in 14 top-flight games stretching back to 2013/14, with 10 of those being losses, and Pardew must be wondering if his time is up