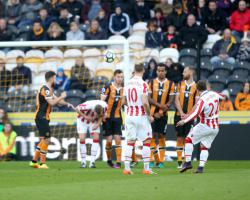 Shaqiri ran the show for Stoke, lighting up an otherwise ordinary game with two superb strikes in either half as Mark Hughes' side followed up last week's first league win of the season against Sunderland with their first league success on the road

It was another chastening experience for Hughes' former Manchester United team-mate Mike Phelan, who on this showing does not possess the calibre of player who can compete with the likes of Shaqiri and Marko Arnautovic

Shaqiri fired tamely wide in the opening exchanges and Hull skipper Michael Dawson, making his first appearance of the season following a knee injury, was alert enough to head Erik Pieters' dangerous cross out for a corner

The first 25 minutes had been so poor it came as a big surprise when, out of nowhere, Shaqiri lifted the tedium with a stunning opening goal.

The Switzerland international was not closed down quickly enough on the edge of the penalty area and took full advantage to curl a brilliant left-footed shot away from Hull goalkeeper David Marshall and inside his near post.

Marko Arnautovic raced on to Shaqiri's ball over the top and when his shot was blocked by Marshall's feet, the ball ricocheted on to Dawson and rebounded back over the crossbar.

Dawson's superb last-ditch tackle denied Wilfried Bony, on a season-long loan from Manchester City, his first goal of the season and Hull were grateful to head into the break just one goal down.

But Phelan's side fell further behind five minutes after the restart following defender Curtis Davies' foul on Shaqiri two yards outside the area.

There was little doubt who would take the free-kick and Shaqiri delivered, curling the ball up and over the wall and inside Marshall's left-hand post.

Bony was denied again when his angled shot flew wide after he had raced clear into the area and Joe Allen, scorer of four goals in his previous three league games, was thwarted at the far post by Marshall's fine save.

Phelan sent on substitutes Hernandez, Harry Maguire and Adama Diomande in quick succession, but it was Stoke, full of confidence now as they appear to have put another slow start to the season behind them, who continued to look the more threatening.