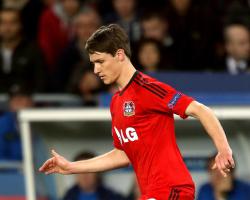 The 25-year-old centre-back has joined the Potters on loan until the end of the season with a view to a permanent move in the summer.

The twice-capped defender currently plays for Bayer Leverkusen, although had spent the first few months of the current campaign on loan with Mainz.

Delighted to capture such a quality player, via the club's official website, Hughes said: "Philipp is a player we've been aware of and have been tracking for some time.

"He will add to the competition for places in the centre of our defence.

"He's got presence, technically he is good, has played at a high level, has gone for big money in the past, and to get a German international at a relatively young age is a good deal for the club.

"He's genuinely excited about the prospect of playing in the Premier League and is confident of making a big impression as a Stoke player."