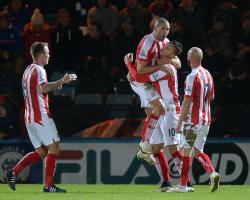 The Potters have been rewarded for their fourth-round win over Rochdale with a game at Ewood Park in the last 16.

The trip to Lancashire will bring back good memories for Stoke manager Mark Hughes, who enjoyed a successful two-year spell in charge at Ewood Park, and Walters is looking forward to returning to the club where he began his professional career even though his time there ended in acrimonious circumstances.

Stoke, the fifth-highest ranked team left in the hat, were pitted against lower-league opposition in the last two rounds, and even though Blackburn are in the Sky Bet Championship, Walters believes Rovers are so good they should be considered a top-flight team.

"It will be a tricky tie," said Walters, who scored the last goal in the 4-1 rout at Spotland.

"They are a Premier League team

The striker was a prolific scorer in the youth sides and at reserve level, but his rise at Ewood Park came to an abrupt halt when he was sold to Bolton after a "breach of club discipline".

The 31-year-old enjoyed a visit to Ewood Park with Stoke in pre-season though and he is looking forward to going back to the club in two-and-a-half weeks.

"I started there as a young boy so I knew a few people who are still at the club and I saw them in pre-season so it will be exciting times," Walters said.

"I am sure it will be a good match

I saw a couple of the people I know in pre-season so it will be good to see them again."

Walters was part of the Stoke team that reached the FA Cup final in 2011, where they lost 1-0 to Manchester City at Wembley.

He believes a cup run will not hinder the club's chances of finishing in the top half of the Barclays Premier League.

"A good cup run gives you momentum in the league," he said.

"It can help us this year and the league is the main thing."