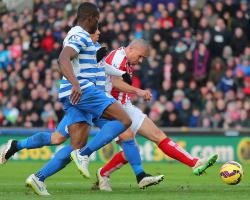 Sloppy play from Rangers was punished twice in the first half as Stephen Ireland teed up strikes for Walters in the 21st and 34th minutes.

Harry Redknapp's side quickly replied through Niko Kranjcar's close-range finish, and, as they searched for an equaliser after the break, skipper Joey Barton struck the crossbar with one free-kick before Leroy Fer had another well saved by Asmir Begovic.

But further poor defending from QPR in stoppage time then allowed Walters to complete his treble with a header, leaving t he Londoners' record on the road in the league this term showing 11 losses from 11 games

While they remain a point adrift of safety in 19th, Mark Hughes - Redknapp's predecessor, who QPR sacked in late 2012 - has seen his team rise to ninth in the table following a fourth win in six league matches.

QPR fans will be watching with interest to see if Redknapp makes any late moves in the transfer window before Monday's deadline, with the manager having said he has been eyeing a couple of players on loan.

Hughes, meanwhile, has appeared to play down the prospect of him trying to bring in new personnel, despite the loss this week of the influential Bojan Krkic to a season-ending knee injury

Stoke certainly did not appear to be suffering for Bojan's absence in the opening half an hour or so here as Ireland - the man who had come into the team for the Spaniard, making his first start since early December - twice set up goals for the Potters' top-scorer Walters.

On both occasions, QPR inadvertently lent a helping hand

Firstly, some ponderous play saw ex-Stoke man Karl Henry let a Mauricio Isla pass run across him, and Ireland reacted sharply, nipping in with a tidy back-heel to tee up Walters, whose shot beat Robert Green.

Victor Moses almost made it 2-0 soon after with a free-kick that curled just outside the top corner, and the ball subsequently broke to Ireland on the edge of box, the midfielder firing wide.

This time it was Eduardo Vargas giving it away in the Stoke half - once more Ireland intervened, launching a counter-attack that saw him eventually square to Walters, and the forward slotted past Green

Another away defeat looked firmly on the cards for the visitors, but within two minutes they had pulled a goal back as the Potters had a defensive lapse of their own

Fer was able to prod the ball to Barton, his cut-back found Charlie Austin and the striker's shot ricocheted off Phil Bardsley into the path of Kranjcar, who had an easy task to tap-in as Stoke appealed in vain for offside

There was a further setback for the home side moments later as their captain Ryan Shawcross was forced off injured, Marc Muniesa taking his place, but they finished the first half strongly as Moses played a one-two with Walters before lashing over.

There were fierce attempts at either end as the second half got under way, Bardsley sending a free-kick swerving just too high and Vargas then having an acrobatic effort palmed away by Begovic.

Moses, who has been caught up in diving controversy already this season, was then booked for simulation, before QPR went close to drawing level with two set-piece efforts.

Barton sent his free-kick against the woodwork, possibly via a slight touch from Begovic, and the goalkeeper then smartly tipped Fer's dead-ball delivery behind for a corner.

It was proving a tense finale for Stoke until QPR again faltered at the back, with Barton's attempted clearance with his head from a cross only finding Walters, who nodded in to take his tally for the season to 10 goals in all competitions.