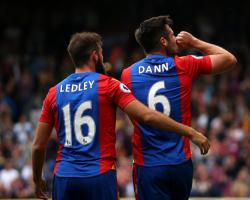 Pressure will continue to build on their manager Mark Hughes after their concession of two goals in the opening 11 minutes made their latest loss inevitable.

They have conceded 14 goals in a run of four defeats from five league fixtures, scoring only three

So minimal was their belief that Palace - in the division's top 10 after a second successive victory - only appeared at risk when they became casual.

Palace's opening goal, in the ninth minute, represented a recurring theme in their visitors' season

Hughes has spoken of his frustration at not having had a settled back four, and they again frequently looked disorganised.

From a free-kick near the edge of the area, Andros Townsend crossed towards James Tomkins, who got the last touch after marker Jon Walters had failed to deal with the ball in.

The absence of the injured Jack Butland - despite Shay Given's experience - was felt again both then, and also when Palace doubled their lead just two minutes later.

His conviction and natural authority is clearly sorely missed by a rudderless unit, and without him Jason Puncheon delivered a right-wing corner that Palace captain Scott Dann powerfully headed in under little pressure.

Much appeared wrong with the balance of a team that featured the considerable talent of Bojan Krkic, Wilfried Bony, Marko Arnautovic and Joe Allen, and was contrasted by Alan Pardew's Palace, who seem to have gelled

Palace have had problems of their own, but many of those stemmed from the lack of a goalscoring threat that recent ÃÂ£27million record signing Christian Benteke has already largely rectified

They also learnt earlier this week that Pape Souare's injuries, following a car crash, could rule him out for much of the season

The club's fans applauded him, recognising his squad number in a 23rd-minute tribute.

Arnautovic's run down the left took him into space, and with Bony well positioned in the area, he over-hit his delivery that Palace easily cleared.

The steadier pace of the second half placed Stoke under less consistent pressure, yet even then they contrived to concede a further two goals.

The first, in the 71st minute, came when James McArthur's curled shot from the edge of the area took a significant deflection off Geoff Cameron to go beyond Given's reach.

Four minutes later and on the break, Townsend scored Palace's fourth when he ran through Stoke's midfield to the edge of the area, cut in on his right foot, and finished into the bottom right corner.

Stoke scored their only goal in the fourth minute of stoppage time, but it provided little consolation

Bony had already missed the game's finest chance when slipping over directly in front of goal when he sent a low cross towards Arnautovic, from where the forward classily finished towards the top right.