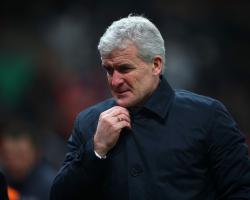 Stoke V QPR - view commentary, squad, and statistics of the game live.Hughes keen on Stoke extensionStoke boss Mark Hughes has expressed his delight at the prospect of extending his time with the club.Preliminary discussions are under way between the Welshman - appointed Potters manager in the summer of 2013 on a three-year deal - and the Staffordshire outfit over a new contract.It has been a happy working relationship so far, with Hughes guiding Stoke to their highest-ever Barclays Premier League finish of ninth last season.They are currently 10th in the table ahead of Saturday's home clash with second-bottom QPR - Hughes' previous club, who sacked him in late 2012.And the 51-year-old has no doubt he and Stoke make a "good fit" for each other.When asked if he had been offered a two-year contract, Hughes said: "We haven't done any details yet - you have more information than me if you are saying it will be two years!"But the owners have intimated they would like to sit down and discuss a new contract."The length and terms will be discussed in due course I would imagine

But I'm delighted they want to do it."I'm very happy here and it has been a good fit

If we can come to some agreement, I will be more than happy."Stoke on Thursday announced two of their players had signed new contracts, with striker Peter Crouch and midfielder Glenn Whelan committing to the summer of 2017.Hughes said of Crouch, the club's record signing who turned 34 on Friday: "I'm sure there was interest in him (from other clubs), but it never progressed to any great degree because I think Peter himself intimated to anyone he talked to that it was his hope he would be offered something here allowing him to stay."Thankfully, that is what we have been able to do."The news of Crouch and Whelan's deals came as a welcome boost for Stoke in the same week that their influential playmaker Bojan Krkic was ruled out for the rest of the season after sustaining cruciate knee ligament damage in Monday's FA Cup win at Rochdale.Hughes says the Spaniard, who will undergo surgery, is doing his best to stay upbeat and could be fit again in time for the start of next term."I think he is very philosophical about it," Hughes said."He understands these things happen - I think his first words to me were "that's football", and that is what it is like

There is no rhyme or reason to the injury, it is just a million-to-one chance."He is very positive

He is looking to be back for pre-season, and if everything goes well, that might be an outside chance

He is very strong mentally and will come through it and be stronger for it."Another positive for Stoke to help counter the news about Bojan is the return of Mame Biram Diouf from African Nations Cup duty with Senegal.Diouf has trained with his club-mates and Hughes says the forward should be back in the matchday squad for the QPR game.The manager is keeping his cards close to his chest, meanwhile, over whether the loss of Bojan will lead to Stoke making a move in the remaining days of the transfer window.Hughes also dismissed talk of him being interested in Bolton winger Lee Chung-yong, and said he expects Potters defender Robert Huth to join Leicester on loan for the rest of the campaign.The chances of Huth completing a move may be complicated by the fact he was on Friday given a two-match suspension by the Football Association after admitting breaching rules in relation to social media comments.QPR manager Harry Redknapp is expected to have both Yun Suk-Young and Richard Dunne available again.Yun has been out with an ankle injury and has not played since December 20 while Dunne came off against Manchester United with a groin strain two weeks ago, but has recovered.The match at the Britannia will come too soon for Sandro, who is close to returning from a knee problem, and Alejandro Faurlin remains out with a cruciate ligament injury.Rangers will train at England's Burton training base at St George's Park on Friday as they look to end a miserable run of results away from home against Stoke.Redknapp's side have lost all 10 of their league games on road this season."It shouldn't be a psychological factor," Redknapp said."They're passionate fans at Stoke and it's a difficult place to go but we have to go away and pick up some points

It needs to start sooner than later."We've done little bits in training but it's about players

You can change what you eat for dinner, whether you go on the coach or the train, but it's about players and how they perform."