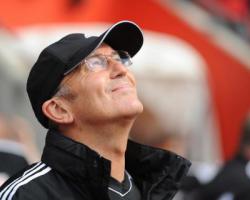 Goalkeeper Jack Butland could make his first Barclays Premier League start for Stoke against Liverpool on Sunday, though Thomas Sorensen is back in training.


With Asmir Begovic having broken a finger, Butland came off the bench to replace Sorensen (Achilles) against Everton and started the FA Cup third-round win over Leicester.


Robert Huth (knee) also trained with the first team this week but may not be ready, and Andy Wilkinson (heel) remains sidelined.


Moroccan international Oussama Assaidi is ineligible but insists he will be backing Stoke all the way when they take on his parent club.


Assaidi is not eligible for the game due to restrictions governing the use of loan players but says he is in no doubt over who to support from the sidelines.


Assaidi said: "I would love to be involved in the game, but through rules and regulations that isn't possible unfortunately.


"I want Stoke City to win the game of course, because this is where I am playing my football at the moment, and for as long as I am here I will want us to win every game we play."


Daniel Sturridge is set to return to the Liverpool squad after seven weeks on the sidelines with an ankle sprain.


The England striker returned to full training this week having not featured in a matchday squad since the Merseyside derby on November 23.


Centre-back Daniel Agger has been ruled out for three to four weeks with a calf strain, but Mamadou Sakho is back after a hamstring injury.


Liverpool captain Steven Gerrard admits the thought of winning the Premier League title is a scary one as he is unsure what his reaction would be but he believes the achievement would undoubtedly top his Champions League-winning heroics.


The 33-year-old midfielder is excited by the prospect of this season being his best chance to win the only domestic honour which has eluded him in a glittering career.


Liverpool were top on Christmas Day and the last team not to win the title having held that position were the Reds in 2008 but they are fourth heading into the weekend and Gerrard has high hopes.


"This is probably my best chance to surprise this country and countries throughout the world to maybe nick the Premier League," he told Sky Sports.


"Sitting here in the middle of January I have a fantastic chance of having a right good crack and getting involved in a title race.


"If we perform like we have done over the last couple of months we can get involved in the title race so that is very exciting.


"It scares me in a way because I don't know how I'd handle myself.


"When I won the Champions League (in 2005) the week after that talk about being on cloud nine or over the moon - all the cliches - it was better than that.


"If I could add a Premier League title to my collection it would mean the world to me, it would probably be the best day of my life besides my kids being born.


"I think it would top the Champions League because it is the one I haven't got."