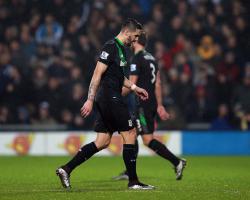 City boss Mark Hughes said in his post-match interviews following the 2-1 defeat at The Hawthorns that it "was likely" the club would contest the decision and try to get the dismissal rescinded.

Cameron is facing a three-match suspension after being sent off for violent conduct after pushing West Brom midfielder Claudio Yacob in the back of the neck.

Stoke said in a statement on their official website, stokecityfc.com, on Monday: "Stoke City are to appeal against the red card Geoff Cameron received in Saturday's 2-1 defeat against West Bromwich Albion at the Hawthorns.

"The US international was shown a straight red card by referee Lee Mason seven minutes from the end of the game having been adjudged to have struck the back of Claudio Yacob's head.

"The club will lodge their appeal submission to the Football Association later today."