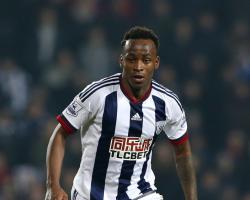 The Potters reportedly made a bid of around ÃÂ£20million for the former England Under-21 international last month but no deal has materialised.

Hughes remains keen on the player, who has agitated for a move away from The Hawthorns in the past, but accepts he may have to move on.

Speaking at a press conference, Hughes said: "It is no secret that we have made bids and have an interest in Berahino but it is not in our hands

He is obviously a player of another club and if they don't want to sell, or have no intention of selling, then there is nothing we can do to affect that.

"We just have to be patient and if the situation changes then we will be ready to sit down and talk, I'm sure, but in the last few weeks that doesn't seem to have moved on to any great extent.

At the moment that is not where we are.

"If it happens we will be delighted

If it doesn't we will move on to (other) targets that we have."

Stoke have signed Wales midfielder Joe Allen from Liverpool in a deal worth a reported ÃÂ£13million this summer and Hughes remains on the lookout for further additions.

Hughes, whose side open their Premier League campaign at Middlesbrough on Saturday, said: "Our intention is to carry on bringing good players to the club and we are in the mix for a number

Hopefully we can get a couple over the line.

"But this year it was never about wholesale changes

It was more about adding good quality to the quality we already had."