Stoke set to break the bank to capture Imbula 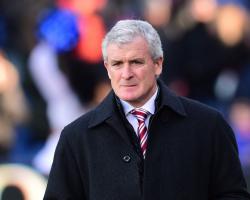 The Potters are believed to have agreed a deal for the 23-year-old which could reach as high as £18million and comfortably outstrips the Â£12million they spent to lure Xherdan Shaqiri from Inter Milan.

"We are hopeful," said Hughes at his press conference ahead of Tuesday's trip to Manchester United.

"It's fair to say it progressed significantly this morning. Last night it was a little bit difficult. We hope at some point we will be able to announce a big signing for us.

"He's a good young player with good power, good ability on the ball, a good range of passing and will add to the quality we already have.

"Seeing him first hand (when Stoke played Porto in a friendly in Germany last summer) resonated with me when it was mooted he may be available in this window.

"We tried to speak to the right people, it's not something we've just jumped into in the last month.

"There's a lot of work been done in the last month or so.

"A lot of things have to fall into place but the hope is we will get it concluded some time today."

Hughes has, however, given up hope of signing Saido Berahino from West Brom - they were competing with Newcastle - after being told the player is not for sale.

"West Brom have been quite insistent in their message that Berahino is unavailable," Hughes added.

"We expressed an interest and we asked to be kept informed, but they have been consistent in their message and I don't anticipate anything."

Another player Hughes has resigned himself to losing is defender Marc Wilson, who he has ruled out for the remainder of the season due to a knee injury sustained in the FA Cup defeat at Crystal Palace.

"It's not a cruciate ligament injury thankfully but it's the medial, so it'll be 10-12 weeks, so it's significant," he said.

"It'll near-on rule him out for the season now but hopefully he'll get back.

"It's one you have to manage correctly which we always do and it should be straightforward in terms of recovery.

"Luckily it's not a cruciate which we feared when it happened."