Stoke out to take advantage of Liverpools European exertions 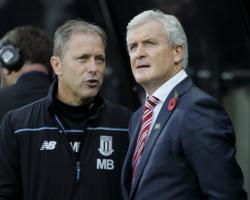 Thursday's quarter-final clash with Bourssia Dortmund promises to be an emotional affair, with Jurgen Klopp returning to the club he led to so much success.

Liverpool's tough first leg in Germany is followed on Sunday by a Premier League clash at home to a Stoke side a place and two points better off - a cushion assistant manager Mark Bowen wants to build by capitalising on Thursday's exertions.

"That could be, from our point of view, a big factor," he told the club's official website, www.stokecityfc.com.

"I don't know off the top of my head what the stats are but it's a fact that a lot of clubs who play away in the Europa League on a Thursday then have problems the following Sunday.

"That will be in our mind, in our game plan and the way we approach the game.

"We'll be looking for the players to start the game fast and take it to them because you'd hope that maybe they might have some sort of hangover from Thursday's game."