Stoke not on the beach yet says boss Mark Hughes 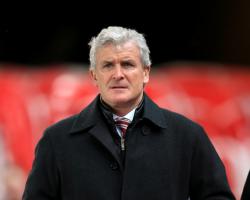 The Potters, ninth in the Barclays Premier League, have won only one of their last six matches and their last two saw them beaten 4-1 at Liverpool and then 4-0 at home by Tottenham.

It has left a campaign that had looked as if it could be heading towards European qualification in danger of fizzling out.

But when it was put to Hughes ahead of Saturday's trip to fourth-placed Manchester City that recent performances suggested his men were now playing as if their season had ended, he replied: "That is an easy thing to say.

"But we have just played the two in-form sides in the Premier League at the moment.

"They are rolling over top teams and it's difficult to cope against them.

"Tottenham are an exceptional side, we felt they were arguably the best we've faced this year."

Hughes, whose team have four games left, has no doubt they have been leaving themselves too vulnerable at the back of late and must address that against his old club on Saturday.

But the Welshman insists he is feeling optimistic rather than fearful about the contest at the Etihad Stadium.

And Hughes said: "We've had disappointing results and performances of late, and we always deal with the here and now, but obviously, psychologically, we know we can go to the big clubs and big stadiums and perform

We have done that in the past.

"And I think the fact it's Man City away allows us to really focus.

"We know even if we were in fantastic form, it would still be a huge challenge for us.

"I think it's good that, under any circumstances, it's a challenging fixture for us

Maybe if we were going up against a team we were expected to win against easily while on a dip in form, it would be more difficult to deal with.

"We have sat down and talked about what we need to do better, and my feeling is we will be fine at the weekend and back to what we know we need to do well to be able to win Premier League games.

It is difficult to overcome them when they are at home.

"But I'm looking for a better performance in terms of the plan we are trying to execute."

Stoke, currently on 47 points, can still better the total of 54 Hughes guided them to last term, the highest tally the club has accrued in a Premier League campaign.

They are also looking to improve on their best finish in the division of ninth, achieved in each of the last two years.

And Hughes added: "We are four games from the end of a long, hard season, but we still have the opportunity to achieve things that haven't been done here before.

"While it's still possible, we'll use that as motivation to keep us going.

"We've had a little bit of a stumble, but we've still got four games we intend to give our maximum to."