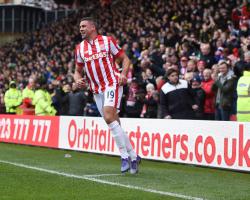 The Hornets looked a pale shadow of the side which memorably beat Arsenal six days ago to reach the semi-finals as they slipped to a 2-1 defeat.

Walters, recalled to the starting line-up due to injuries, tucked in his fifth Barclays Premier League goal of the season in the first half and then cleverly set up Joselu for the second after the break.

Watford pulled one back through Troy Deeney but could not prevent Mark Hughes' side moving to within a point of Manchester United in sixth place.

Watford created the first opening when Odion Ighalo, a goalscorer at the Emirates, hit an angled drive which Jack Butland kept out low to his right.

But it was all Stoke after that, although Walters chose the wrong option when, rather than shooting from the corner of the six-yard box, he pulled the ball back to no one.

However, he was in the right place in the 18th minute when overlapping full-back Phil Bardsley swept a low ball into the area.

Hornets defender Miguel Britos missed the ball completely, allowing Walters to pounce at the far post for his fifth Premier League goal of the season.

City had the ball in the net again shortly after but Marko Arnautovic was on the wrong end of the tightest of offside decisions when he tucked in another cross from Bardsley.

Jose Manuel Jurado could have hauled Watford level after he was teed up by Ighalo but the Spaniard lifted his shot too high.

Tempers briefly flared just before the interval when Allan Nyom's challenge shoved Arnautovic into the advertising boards, earning the Stoke forward a sore ankle and the Watford defender a yellow card.

And six minutes after half-time Stoke grabbed their second thanks to an error from Heurelho Gomes and a canny piece of invention from Walters.

Hornets keeper Gomes scuffed his free-kick straight to Walters, who instinctively volleyed the ball into the path of Joselu leaving the Spaniard clean through to score with a deft lob.

Some more sloppy play, this time from Etienne Capoue, almost let Ibrahim Afellay in for a third but Gomes kept out his shot from 15 yards.

Watford pulled one back when substitute Ikechi Anya crossed for Deeney to head home, but they were unable to force an equaliser.