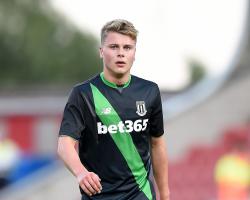 Shenton, 18, was named the Potters' academy player of the year last season, a campaign in which he got the two first-team run-outs he has to his name so far.

The first of those was a substitute appearance in the Capital One Cup in August 2014.

He subsequently became Stoke's youngest Barclays Premier League player when he came off the bench in the 4-1 defeat to Manchester City in February - a game that was just two days after his mother's funeral.

Announcing the news in a statement on their official website on Tuesday, Stoke said Shenton, now on a contract through to the summer of 2020, is "poised to gain further experience of first-team football this season with a spell out on loan".

And club chief executive Tony Scholes said: "Anyone with any connection to Stoke City will know how highly we regard Ollie.

"Ollie has already been on our books for more than a decade and was playing for our Under-18s on a regular basis as a 15-year-old.

"He's still learning his trade but he's a player with huge potential and we're delighted he has signed a long-term contract."