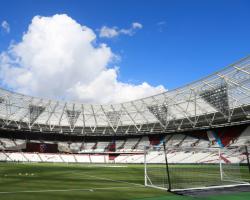 Since moving to the former Olympic Stadium ahead of the current campaign, the ground has been plagued by issues - the latest and most serious of which saw violent scuffles between rivals fans that marred last week's EFL Cup tie against Chelsea.

In an attempt to avoid a repeat of such scenes, West Ham, E20 Stadium LLP and London Stadium 185 - the former Olympic Stadium's partners - have made five changes to protocol, including increasing the distance between home and away supporters and widening the line of segregation on both sides of the lower tier from where away supporters watch games

The latter measure will extend to the lower concourse walkway, with higher barriers and a 10-metre wide sterile area introduced, and as a result around 80 Stoke supporters will have to move seats

A spokesman for Stoke said: "The club have been advised by West Ham that some supporters will be issued with new tickets, this is due to West Ham changing their segregation plans.

We are working to contact those affected to re-issue the new seats that have been sent to us by West Ham."

Stoke have sold out their 2,800 allocation for Saturday's game, where fans could see stewards operating handheld video cameras to act as a deterrent.

Upon leaving the London Stadium, supporters will be segregated.

Mark Field, v ice-chairman of the all-party parliamentary football group and Cities of London and Westminster Conservative MP, said West Ham should play behind closed doors at the former Olympic Stadium if the violent scenes that followed the Chelsea game are repeated