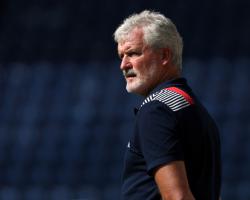 The 19-year-old, who came through the Dons' academy, has penned a three-year deal with Mark Hughes' side.

Central defender Sweeney made 10 appearances for Wimbledon last term as they won promotion to Sky Bet League One via the play-offs.

The Republic of Ireland youth international thanked the Dons following his departure.

He told the League One club's official website: "Thank you to all the fans for your support and to the manager Neal Ardley for giving me my chance in football, I couldn't thank him enough."