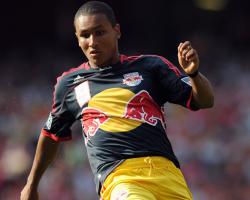 The Potters completed a free transfer for the 21-year-old despite being denied a work permit in November and have decided to send him to the Eredivisie while they prepare a second application.

Agudelo, who left Major League Soccer franchise New England Revolution, made his international bow as a 17-year-old and has earned 17 caps.

Stoke must wait four months from the date of the initial work permit application to make a second bid to bring Agudelo to England, but appear more likely to wait until the summer.

Chief Executive Tony Scholes said: "We were surprised and bitterly disappointed when our application for a work permit was rejected by the appeals panel - as were many other people in the game.

"It's still our view that Juan is a great talent and is a player that Mark Hughes would like to join our squad. We have therefore decided that we are going to reapply for a work permit at the earliest opportunity.

"We have signed Juan but he cannot play in this country, so we're loaning him out to Utrecht to allow him to not only develop his experience of playing in Europe but also to stay match sharp.

"Hopefully we will be successful with our second work permit application and Juan will be able to join Mark's squad in advance of next season."

The club's pursuit of Agudelo comes with manager Mark Hughes concerned about a lack of out-and-out strikers at the Britannia Stadium.

Established pair Peter Crouch and Kenwyne Jones have already been joined by Manchester City loanee John Guidetti, who was signed last week until the end of the season.