Stoke close in on Agudelo 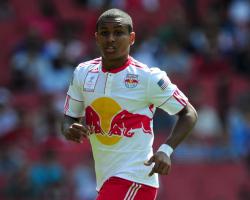 The Potters failed to get a work permit for the 21-year-old in November and will not be able to re-apply until March.

However, Press Association Sport understands Stoke are in the process of sounding out a European club not so tightly bound by regulations who are willing to take the USA international on loan in the interim.

Stoke are confident they have a more favourable chance of succeeding with a work permit application second time around, particularly if Agudelo is playing regularly in Europe, and for that reason are pushing ahead with a permanent deal for the forward.

If the necessary paperwork is subsequently obtained, manager Mark Hughes would have the option of bringing the player back to the club or leaving him out on loan for the remainder of the season.

Agudelo has been a free agent since his contract with the New England Revolution expired after the MLS season.

"There's no other club that has supported and believed in me like @stokecity FC has. #SignedToday - 6 month loan imminent #Europeanfootballer" he wrote on Twitter on Tuesday.

Stoke yesterday made midfielder Stephen Ireland's loan from Aston Villa a permanent deal, which then allowed them to sign John Guidetti on a temporary basis from Manchester City.