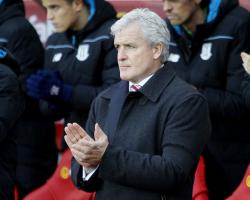 The Potters head into the contest trailing 1-0 from the first leg at the Britannia Stadium.

If they can turn the tie around, the Staffordshire outfit would be in a League Cup final for the first time since 1971-72, the season in which they won the competition to secure what is the only major trophy in their history.

And Hughes said on Monday: "It has been 40-odd years, and we remind the players of that because this is an opportunity to make your mark in the game.

"When that presents itself, you really have to grasp it.

"It is an opportunity we are not going to allow pass by lightly.

"We are going to give it everything - it is a chance for everybody involved here to achieve something that hasn't been achieved for many years.

"And it is important to us because if we can get to a final, win a trophy, then that gives you a winning mentality - you've experienced that as a group and that will help you to continue to progress.

"It is a big part of what we want to do moving forward."

Hughes admits it is a "big test" that awaits Stoke, whose last victory at Anfield came in 1959

But he believes his side will benefit from the fact that they are in a must-win scenario.

"We are behind in the tie and we know exactly what we have to do," the Welshman said.

"There is no grey area for us - we have to win

And I think when you are in that situation as a player or a manager, it clears the mind.

"The clarity of what we need to do is going to be an advantage I think."

The match pits Stoke, currently ninth in the Premier League, against a team two places and one point better off than them in the table.

As well as losing the first leg, the Potters were also beaten by Liverpool - then managed by Reds boss Jurgen Klopp's predecessor Brendan Rodgers - in the league earlier this season.

But they thrashed them 6-1 at the end of the previous campaign, and have registered notable victories since against the likes of Chelsea, Manchester City and Manchester United.

Hughes said: "We are going to really push this.

"If we do what we're good at, we'll run them very close."

Stoke will be missing skipper Ryan Shawcross, with it being revealed on Monday that the defender is set to be sidelined for up to a month by the back injury he sustained in Saturday's 3-0 loss at Leicester.

Hughes admitted the news was a blow, but said: "I've still got good players who can come in and they will be prepared and ready to go."

Marko Arnautovic, who has been carrying a hamstring problem, was not part the squad at the weekend and fellow forward Bojan Krkic was an unused substitute, but both are expected to return to the starting line-up.

Geoff Cameron (ankle) remains sidelined but may be in contention for Saturday's FA Cup game at Crystal Palace.