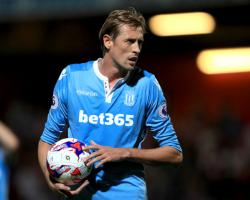 The former England forward has started just two games for Stoke this season and none since August.

Crouch responded to a tweet lamenting his performances on a football computer game with the quip: " At least I'm getting a game somewhere."

Hughes said: " Pete's quite sharp on Twitter so I always keep a look out once people tell me he's been on there

Usually it's quite amusing

"It's probably true, he's a little bit frustrated but it is what it is

"But he's just got to be patient like a number of other people at the moment because we're winning games and playing well so it's difficult to break in."

It is becoming a familiar story for Crouch, who only started four Premier League games last season

"Everyone gets to a point where they're frustrated when they feel they're not getting opportunities they would like," said Potters boss Hughes

"He's not the most forceful in that regard but certainly he's knocked on my door and had a word in the past, as I would expect

He's a seasoned player, he's got a lot of experience that we value

"At the moment we're in a position where we want a little bit of continuity, which we've lacked prior to this run."

It's about having a balance in the squad

Pete clearly gives us a different type of threat.

All our strikers offer different things and Pete is very much a player we value and one we'll use as we see fit.

"He's going to play a part this year, he knows that, and he'll get the right amount of games I feel."

It is no surprise Hughes is sticking with a settled side given the Potters' recent form.

After failing to win any of their first seven Premier League games, back-to-back wins over Sunderland and Hull have settled the nerves at the bet365 Stadium.

Those results came on the back of a draw with Manchester United, and Stoke will look to make it three successive victories and five unbeaten against Swansea on Monday.

The Swans sit 19th in the table and are looking for a first win under new boss Bob Bradley.

Hughes said: "The Sunderland one was a big one clearly because we needed to get off and running in terms of maximum points but even before then we were playing well.

It won't be easy

I think Swansea are a little bit like ourselves where they've got a lot of quality and you feel they're in a false position.

"I'm sure the new manager will have a way of playing that he'll want to implement as quickly as he can."

Geoff Cameron is Stoke's main doubt after hyper-extending his knee late on against Hull while Phil Bardsley will be given as much time away from football as he needs following his death of his grandfather in a car accident on Tuesday.