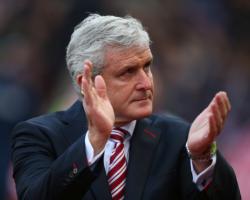 Arsene Wenger's team have not lifted the trophy since 2004 and have often been criticised for starting a campaign impressively but seeing their challenge fade around February and March.

The Gunners are in a rich vein of form at the moment, unbeaten in the Premier League since the opening day and second in the table just three points behind leaders Chelsea.

They are also through to the knock-out stages of the Champions League as group winners - something they have not achieved since 2012.

Stoke are next up for Arsenal at the Emirates on Saturday and ahead of the trip, Hughes said: ''Arsenal, as a team, look in good shape and whilst we have a lot of confidence, given their form too, it isn't a good time to play them.

''At times, Arsenal have struggled with consistency and it has cost them, but you sense this could be their year.''

Stoke's record away to the Gunners is poor, having lost all eight Premier League matches between the two teams in north London.

But the Potters recently put to bed a hoodoo against Manchester United with a draw at Old Trafford, also ending an eight-game losing streak, and Hughes hopes his players can draw on that against Arsenal.

It will be tough but we are in a good place,'' said Hughes, whose side have won five of their last seven league games.

''It's important for us to give ourselves an opportunity to get something out of the game, we need to stay in the match and frustrate them

But I think it's important to also go there with a positive mindset.

''We've got the experience of going to Old Trafford, where our record was poor as well, and we've done that this season so it's not as if we are looking back two or three seasons for a positive to help us

It's in our recent memory.''

Stoke's cause will be helped by the news that Bruno Martins Indi and Marko Arnautovic will be fit.

Defender Martins Indi was sent for precautionary X-rays after he was elbowed in the face by Burnley striker Ashley Barnes last weekend but he has been passed fit along with midfielder Arnautovic, who was also nursing a knock following the 2-0 home win against the Clarets.

However, central defender Ryan Shawcross remains a major doubt with a calf complaint.