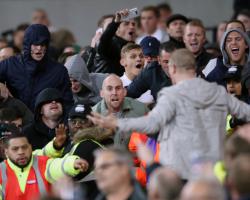 The Premier League contest will be the first fixture at the Hammers' new ground since their 2-1 EFL Cup victory over Chelsea there on October 26 that was marred by trouble between rival supporters.

The ugly scenes have led to various changes being made to protocol in a bid to avoid a similar scenes happening again, including increased segregation between home and away fans.

Stoke boss Hughes said on Friday at his press conference to preview Saturday's match: "Clearly it seems like they've had problems and that's disappointing.

You don't want to see that kind of situation developing in any grounds.

"But from our point of view, we have been reassured.

I think they are doing things a little bit differently - there will be more of a police presence actually in the ground to begin with, and more segregation.

"So I think we're quite comfortable.

"We have a really fantastic following away from home, we're very proud of it and proud of how they behave and conduct themselves.

"We feel that won't change and we just hope things put in place will be adequate for their protection and everybody else's."

Twelfth-placed Stoke go into the fixture on a winning streak that was extended to three matches by Monday's 3-1 victory over Swansea.

A run of five games unbeaten is quite a contrast to the form Stoke started the season in, losing four of their first five league matches and lying at the foot of the table with just a point to their name.

Hughes said on Friday of that start: "There were a lot of factors to it - we had a few injuries, a fixture list that was quite demanding as well, and we hadn't got up to the levels we wanted at the beginning.

"I think people are a little bit quick to start passing judgements on people, on teams, on clubs in terms of how successful or not they are going to be in the season.

Xherdan Shaqiri faces a fitness test ahead of the West Ham match after coming off in the first half against Swansea with a hamstring problem.

Fellow winger Marko Arnautovic is suspended, having picked up his fifth booking of the season in Monday's game.