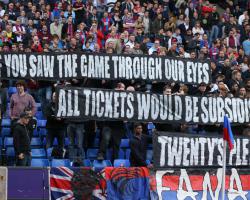 Following a meeting of the 20 member clubs in February, it was decided more needed to be done to help travelling supporters, who face increased costs to attend matches across the country, but also help make a unique atmosphere.

The new measures will replace the Away Supporters' Initiative, which was introduced in 2013 and saw clubs individually implement a range of measures, including travel subsidies, reciprocal pricing and reduced admissions as well as improved facilities.

The £30 cap will run from the start of the 2016/17 campaign through to 2018/19, a period which will see the Premier League clubs receive record revenue (£5.14 billion) from broadcasting deals.

"Clubs know that away fans have a unique status

They are essential for match atmosphere and stimulate the response from home fans that distinguishes Barclays Premier League matches from those of other leagues," a statement from the Premier League read

"Away fans have additional travel costs and pay individual match prices, as season ticket and other discounts are not available to them and the responsibility for them is shared between clubs and therefore it is right that there is a collective initiative to help them."

Arsenal have often come in for criticism given their high ticket prices in some sections of the Emirates Stadium, for both home and away supporters.

The Gunners have announced additional measures to follow on from those of the Premier League collectively, which will see a further reduction in attendance costs for fans.

All general admission season ticket and match ticket prices for the next two seasons have been frozen, while Arsenal will also provide a further £4 discount for its away supporters attending Premier League matches in addition to the £30 cap.

A club statement added: "This will ensure no Arsenal fans will pay more to support Arsenal at Premier League away games than the lowest priced £26 ticket that both visiting and home fans can pay to watch their teams at Emirates Stadium."

"We have fantastic support home and away. We know that following the club is a commitment and are always seeking to strike the right balance in our pricing," he said on www.arsenal.com

"In terms of the financial support for away fans, we have consistently been strongly in favour of doing more to help and were originally in favour of a Premier League proposal around travel initiatives which would have been even more generous

"Once it became clear this would not receive enough support across the Premier League clubs, we supported and directed the funds to the £30 cap plus an additional £4 ticket discount for Arsenal's away fans."

Everton have welcomed the Premier League's news and say they have worked hard to find a better deal for their fans.

Chief executive Robert Elstone said: "Today's undertaking is absolutely right for away fans and for the Premier League

"Most clubs have recognised for some time that we need to do something for the travelling supporter. It is absolutely right that football, as a family, looks after that group of fans.

"Our away fans are among the most dedicated and committed throughout the Premier League and that loyalty is deserving of this commitment by the clubs."

Liverpool fans group Spirit of Shankly have been among the leading voices in the campaign for cheaper tickets.

Spokesperson James McKenna said: "It's a very good step in the right direction for supporters. It's good to see the Premier League have now finally taken action on this very important issue that we have been asking them to take action on for the last three or four years.

"There has been frustration it has taken so long but we are just pleased they have now taken this action. We have been saying the price of away tickets was too much and this new TV deal presented them with an opportunity to lower them.