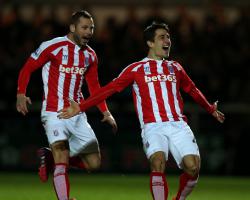 After watching the likes of Chelsea and Manchester City bow out of the competition over the weekend, Sky Bet League One Rochdale were in the mood to cause another shock.

But Mark Hughes' side, the fifth highest-ranked team left in the cup, avoided an upset with a 4-1 win on Monday night.

Bojan put the Potters ahead with an early first-time volley, but his evening ended soon after as he hobbled off with an injury.

His replacement Stephen Ireland doubled Stoke's lead at the start of the second half and Moses then set up a fifth-round tie at Blackburn with a dipping shot from an acute angle.

It could have been a different story had Dale taken their chances at the end of the first half when they had Stoke on the ropes.

But Dale could only muster a late consolation through Rhys Bennett and Jon Walters sealed the comprehensive win with Stoke's fourth in stoppage time.

Having watched Middlesbrough and Bradford record shock wins over the weekend, Rochdale had every reason to be confident of causing another upset.

The home crowd - and their incredibly enthusiastic mascot Desmond the Dragon - urged Dale to go for the kill early on and Peter Vincenti almost obliged, firing a volley just wide after just 90 seconds.

Two minutes later the Dale supporters fell silent though as Bojan put Stoke ahead with probably the best goal of the fourth round.

Olly Lancashire's clearance looped up into the air and Bojan belted a swerving first-time volley past the diving Josh Lillis.

Dale refused to lie down and set about finding an equaliser immediately.

Stephen Dawson went down in the box after tangling with Philipp Wollscheid, but referee Martin Atkinson waved play on.

Joe Rafferty swung in a teasing cross, but it was just too high for Matt Done and Ian Henderson, who arrived with pace into the box.

The home fans rose to their feet as Bennett carved open the Stoke defence with a brilliant 30-yard ball, but Wollscheid nicked the ball off Done's foot just as he was about to pull the trigger.

Tempers flared in the 28th minute when Vincenti slid in two-footed on Moses, but Atkinson kept his whistle in his pocket, much to Hughes' annoyance.

He tracked Vincenti down and put in a tasty challenge

A melee ensued, with members of both teams squaring up to each other.

Atkinson waited for the situation to calm before booking Bojan and Vincenti.

It was to be Bojan's last contribution to the game

He hobbled off after breaking down during a run on goal and was replaced by Ireland.

Dale ended the half on top.

Bennett and Henderson had no problem prising open the flat Stoke defence with cutting passes, and the only reason they did not equalise before half-time was because of some panicky finishing from Done and Dawson.

As was the case in the first half, Dale started slowly and all the momentum they had built up evaporated when Stoke doubled their lead in the 52nd minute.

Moses stole in behind Joe Rafferty and squared to Ireland, who was unmarked thanks to Walters' run to the near post, and he stabbed the ball into the net.

Hughes punched the air, deflating the atmosphere with his upper cut.

Just after the hour the Stoke boss was celebrating again as his team scored with another fantastic goal.

Moses toyed with Rafferty again, turning the right-back twice before bending a curling shot into the far corner.

It was a goal worthy of winning any cup tie, but Rochdale had other ideas.

Finally, their finishing matched up to their build-up play, with Bennett sweeping home from inside the box after Stoke failed twice to clear their lines.

Rochdale had left it too late to find two more though and Stoke added a fourth in stoppage time when Walters tapped in from close range after a break from the visitors.