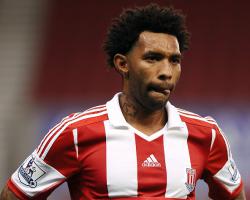 The 31-year-old winger was set for the Britannia Stadium exit under former Potters boss Tony Pulis, but was granted a reprieve by new manager Mark Hughes after his close-season arrival.

However, Pennant has featured just 11 times under the ex-Manchester City boss and is now looking to get his career back on track with another team.

"I met with the manager and he was honest with me which I appreciated," Pennant was quoted as saying in the Daily Mirror. "I wasn't playing and at 31 now I need to be playing games.

"I'd like to thank the club for the opportunity of a new challenge and would like to thank everyone at Stoke City and the fans for the fantastic support over the last few years.

"I'm looking forward to the new chapter in my life."

Pennant joined City, who have yet to confirm his release, in January 2011 from Real Zaragoza following a successful loan spell.

The former Liverpool and Birmingham man failed to nail down a regular first-team place, though, and spent part of last season on loan at Wolves.