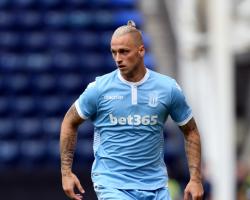 The Austria international, the Potters' top-scorer and players' player of the year last season, had been linked with a move to Everton.

The 27-year-old has been a big hit at the Bet365 Stadium since his arrival from Werder Bremen in 2013 and had one year left on his previous contract.

Stoke's hopes of keeping on to one of their prized assets might have been helped by his quiet showing at Euro 2016, where Austria bowed out in the group stages.

But he hinted that he had options to debate before committing himself to the club on a long-term basis.

Writing on his Instagram page, alongside a picture of his contract signing, Arnautovic said: "I am proud and thrilled to finally let you know I am going to remain a Potter and will continue playing with my team and for my fantastic fans.

My family and I could not be happier

Can't wait for the season to begin!"