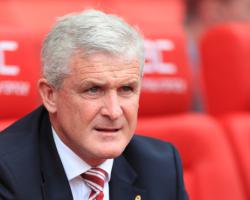 The newspaper has published several allegations over the last week, including claims that 10 unnamed managers have taken so-called 'bungs' in transfer deals.

Sam Allardyce saw his contract as England boss terminated by mutual consent on Tuesday after he was secretly filmed making a series of controversial comments.

Former Barnsley assistant Tommy Wright was then sacked by the Tykes on Thursday after the newspaper alleged he took a ÃÂ£5,000 payment from undercover reporters posing as representatives of fake investors from the Far East.

QPR manager Jimmy Floyd Hasselbaink, Leeds owner Massimo Cellino and Southampton assistant Eric Black are among others to have been filmed by undercover reporters as part of the 10-month investigation

All those named so far by the newspaper deny any wrongdoing.

Stoke boss Hughes has watched on as the allegations have been published and says the "debate" over who the unnamed managers are should be brought to an end.

Asked if football is rotten, he said: "Clearly there's a worry that that's the perception that will be taken by a lot of people.

"I think if there is evidence that certain individuals have been involved in things they shouldn't have been, then I think it's important those guys are named because, if they're not, then everybody is guilty by association just by virtue of being a manager or a coach or involved in football.

"If there is any wrongdoing, then clearly those people have to be named and then everybody else is seen in the correct light

At the moment there's a lot of debate on who's involved, who isn't, so that needs to be clarified."

Hughes - who has managed QPR, Fulham, Manchester City, Blackburn and Wales in the past - claims he has never been offered a 'bung', an assertion which was echoed by Sunderland boss David Moyes.

Moyes said: "I can only say in my time, I have not come across it, I have not."

In the wake of recent allegations surrounding transfers, and third-party ownership in particular, Moyes has called for greater transparency when it comes to fees.

Moyes added: "There is a lot going on out there, there are big, big sums of money being talked about for transfers and I think it might be better that the public get to see that because at the moment, it sounds as if there is a distrust of the managers or the coaches.

"I think it's about time that, if we are disclosing things which are happening just now, I think it would be good to have transparency with the transfers as well.

Pulis said: "It's happened and the sad thing for me is, on the football front, Sam has worked all his life to get the job and it's gone.

"I think everything should go to the governing bodies and they should assess and take appropriate action.

"He's worked all his life for 30 years, his ambition was to become eventually England manager

He's got the job and he's lost it.

"All the rest of it that surrounds it, that we've been reading about and seeing, it's now time for the FA and governing bodies to take that information, analyse and assess it and then act on what they think is right and wrong.

Just on the football front, me personally, I'm very disappointed."