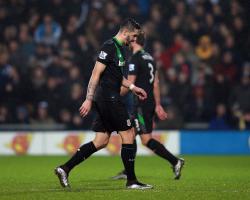 Hughes said: "We'll have a look at that and decide whether or not to appeal but I think it's likely.

It is understandable to a certain extent.

I thought he has gone down with the intention of maybe getting Geoff sent off and unfortunately for us that's what he's able to do."

It was his first goal since October 2014 while Evans opened his Albion account - which sent the Baggies nine points clear of the Barclays Premier League bottom three - and earned praise from Pulis.

He said: "He's been a great signing for us

His quality in possession is first class

He slows things down for us and is more than just a good defender.

"We've played him at centre-half, left-back, in the centre of midfield - he's done a good job in all of those.