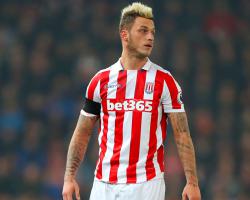 Hughes will be without his influential forward for the trip to West Ham on Saturday because referee Michael Oliver booked him in the 3-1 win over Swansea for a second-half challenge on Ki Sung-yueng that appeared legitimate.

The Stoke boss suggested Oliver had stated that, upon reflection, he believed Arnautovic had in fact fairly won the ball, but with Hughes unable to challenge his fifth caution of the term with the powers-that-be, the Welshman will have to leave him out of his team to face the Hammers

"That's something that needs to be looked at - red cards can be overturned, why can't yellows," Hughes argued.

"At some point they're going to hurt you because once you've accumulated a certain amount then you're looking at suspensions, like we are after Marko's booking.

"It's unfortunate the rules don't allow you to question it when the referee acknowledges he's made a mistake.

"It was a fair tackle

I think the guys have spoken to Michael Oliver and I think he acknowledges that maybe he's made a mistake.

"It was a good tackle

I've seen what he's seen and I can understand maybe why he's thought it's a tackle from behind but it doesn't help us, that's five bookings, we can't do anything about it and he's going to be missing at the weekend."

Arnautovic may not be the only creative spark missing for the Potters at the London Stadium after Xherdan Shaqiri was withdrawn in the first half having complained of tightness in his hamstrings.

Hughes lauded his summer signing but warned he will continue to slowly expose him to the Premier League.

"I could have put more senior players on because it was quite early but I just felt Ramadan was ready," he said.

I was really pleased with his output.

"He's only 19 and made a big leap of faith coming here, but he's got a lot of experience

He's played 60, 70 games in senior football in Egypt so he knows his way around a pitch

His physicality is good enough as well so that helped him.

"We've got an exceptional player there

He won't play every game, we will use him sparingly

You sense when you've got an option like that, at some point you have to use him."

Such options are a luxury not afforded Swansea counterpart Bob Bradley and after taking just one point from his opening three games at the helm, the American hopes his full-on training sessions will eventually bear fruit

"I think (the fitness) has improved but again, there are all sorts of ways to train teams," he said

"In terms of physically, it's football reactions, football explosiveness, duels, and it's also true when you have the ball - do you provide enough options on the ball, do you move quickly or is he stranded because everyone is resting? I think there are a lot of little things that need work."