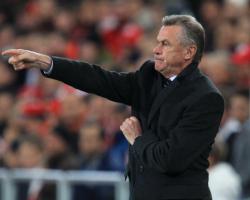 Hitzfeld, hugely successful during his time in the Bundesliga with Borussia Dortmund and then Bayern Munich, told a Swiss newspaper this week that he hopes Xherdan Shaqiri will not stay stuck in "no man's land" with Stoke, who he described as unexciting, and that they should be no more than a stepping stone for the midfielder to earn himself a move back to a big club.

The 67-year-old managed Shaqiri while in charge of the Swiss national team and believes the player left Bayern too soon to join Inter Milan, where he stayed just six months before joining Stoke for ÃÂ£12million in the summer of 2015.

However, Hughes insists Shaqiri is happy at Stoke and thinks Hitzfeld should educate himself about English football.

I'm sure he would enjoy it," said Hughes

"Maybe he should have spoken to Shaq before he came out with that comment."

After an indifferent start, in which the Potters took eight matches to gain a first Premier League win, Stoke have now lost only once in the last eight games and Hughes is looking to continue that momentum at home to Burnley on Saturday

He said: "We're back on track

Since that day we've changed things around and changed personnel

"It was important after the Bournemouth game that we bounced back

We were disappointed with the result and we were very keen to get quickly back on track."

Influential midfielder Joe Allen is available again after serving a one-match ban and the Wales international, Stoke's leading scorer this season, is expected to be restored to the starting line-up against Burnley