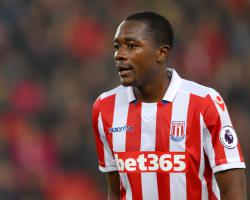 The Potters head to Hertfordshire down on numbers in midfield due to Joe Allen's suspension and injury concerns over Glenn Whelan and Geoff Cameron, meaning Imbula is line for his first Premier League start since September 10 when Stoke were thumped 4-0 by Tottenham.

The 24-year-old himself offered an honest assessment of his early-season performances this week, stating he played "very badly" and needed to apply better application - words which were appreciated by his manager.

Hughes revealed he had chaired his own heart-to-heart with Imbula as he looks to unlock the potential in a player he deemed worthy of ÃÂ£18.3million at the start of the year.

"We had an honest conversation when he went out of the team and I made it clear there were aspects of his game he needed to improve if he wanted to progress in a really difficult league," Hughes said.

"He's working hard and still a young man, in fairness, and this is a big step for him

We've got to be patient because he's going to be here for a long time.

"G is a little bit frustrated and he was honest enough to say that, given the amount of ability he has, he wasn't able to impact games.

"He needed to go out of the team, but we've had a really good response on the training pitch and his focus is very much on getting back into the team.

"It could be this weekend

He's a viable option given the circumstances

His training and his work is first class at the moment, so I'd have no qualms involving him."

Should Hughes decide a visit to Vicarage Road is not the time to restore Imbula, the out-of-favour Marc Muniesa is a possible candidate in central midfield.

The former Barcelona defender has been limited to just 15 minutes of top-flight football this term and hinted he may assess his future come January if his chances continue to be limited.

Any exit plan is not currently on Hughes' agenda, though.

It's been difficult for Marc - his role here has been diminished somewhat because he's struggled with injuries at key times when he's got into the team.

Those are the players you want to do well and give them opportunities.

"It hasn't happened so much this year but things change very quickly in football."