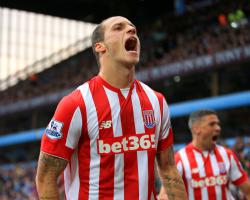 On Saturday the 26-year-old, whose existing deals runs until the summer of 2017, marked his 100th appearance for Stoke with both goals, the first from the penalty spot, in a 2-1 home win against Aston Villa.

When the time comes he will sit down," said Hughes

"And that's the right attitude

Since he's come here, we have talked about his ability, power and pace

"He's getting a good return of goals

The two goals take him to double figures."

It was perhaps a surprise to see manager Remi Garde make only one change to that team, with Alan Hutton replacing Micah Richards in defence, but the Frenchman did get a positive response from his players, even if ultimately the game ended in another defeat

And Garde felt justified in his selection, saying: " I have choices to make - sometimes, when I have enough players to do so

"Micah has played some games

Everybody will have his chance

"But I think the way the team behaves (against Stoke) gives me reason not to make too many changes, because I think in terms of spirit the same players responded very well

I don't think I have too much choice, secondly."

"There are still 11 games to play

R esults for our direct rivals were not bad for us

But I always say the same, I'm not looking at our rivals

There are still a lot of points to play for," he said