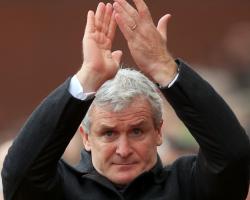 When the Welshman succeeded his compatriot in the summer of 2013, the Potters were widely associated with long-ball tactics but they have since received plaudits - particularly of late - for their free-flowing style.

Hughes' tenure has so far seen the club achieve successive ninth-place finishes and they are now only two points off the Barclays Premier League top five.

Stoke head into Saturday's trip to Pulis' West Brom in fine form, having won three of their last five league games, and Hughes is thankful for the foundations laid by his forerunner.

"Certainly (what I inherited) initially was a big factor and I was very grateful for that," the City boss said.

Undoubtedly I have benefited from that."

While Hughes emphasised that very few of Pulis' key men remain regulars, he picked out one of those - defender and captain Ryan Shawcross - as a stand-out performer of the current campaign.

He also mentioned goalkeeper Jack Butland, who was brought to the club by Pulis in 2013 and has kept eight Premier League clean sheets in his maiden season as their first-choice stopper.

Asked who his player of the season was so far, Hughes said: "I think we are all encouraged by how Ryan, who missed the start of the season (through injury), has come back really strongly, which is credit to him.

"I think we have had a great start from Jack Butland as the number one here, so we are pleased with how he has progressed

Hughes also stressed that he does not think Stoke fans will be too focused on the fact Saturday's match pits the Potters against a former manager.

"I don't think it's about that," he said

"They would love us to win another Premier League game, I'm convinced of that.

"It is a good run of form we are on and we want that to continue."