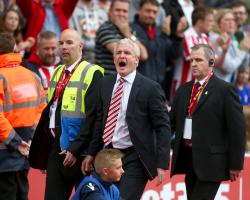 Hughes was sent to the stands during the first half of his side's 4-0 home loss to Tottenham last Saturday having left his technical area as he protested angrily against two decisions made by the match officials.

He was unhappy that what he deemed a foul on Jonathan Walters had gone unpunished, and that Marko Arnautovic was booked for diving moments later.

Hughes was subsequently charged by the Football Association with misconduct, which he says was a result of him not leaving the touchline quickly enough having been dismissed.

While he disagrees with the charge, with him claiming he was simply "hanging around" trying to get information about where to go from fourth official Jon Moss that was not immediately forthcoming, he has opted not to contest it.

In terms of the dismissal itself, Hughes admitted post-match he had acted in a "forceful manner" and accepted that "by the letter of the law" him leaving his technical area did merit him being sent off.

But he feels it is something other managers are not being punished for doing.

Speaking on Friday ahead of Sunday's trip to Crystal Palace, Hughes said: "The defeat and then the charge - it rubbed a little bit of salt in the wounds.

"I was sent off for leaving the technical area, and my understanding is the improper conduct charge is because I didn't leave immediately - which was a little bit difficult, because I didn't know where I was supposed to go.

I was asking the fourth official, who, by my understanding, should know that information

But I didn't get that information quickly enough.

"I'm not contesting it because I don't think we'll win

I'd rather give that money to my grandchildren.

"Given I was sent off after 35 minutes for going out of my technical area to any great extent for the first time, once in 35 minutes is not bad

I think a lot of other managers seem to do it a lot more than that.

"Suffice to say, I'll be watching the game tonight (Chelsea v Liverpool) with maybe more interest than normal, in terms of whether or not it is officiated in the same manner, given the managers and their emotional reactions to things.

"Behaviour in and around the technical area is another directive which it seems is being imposed at the moment a little bit differently from one game to the next.

"My view is it needs to be more consistently followed by referees and officials.

"If you get that consistency right across the board then nobody here has any problem, myself included

But at the moment, that doesn't seem to be the case."

Earlier on Friday, Stoke had released a statement announcing that although Hughes disagreed with the FA charge, he would not be contesting it.

Stoke added that another concern was "an incorrect application of the Professional Game Match Officials Limited's (PGMOL) own guidance note on the use of electronic equipment in the technical area in respect of a manager communicating with technical area staff from the directors' seating area after Mark was dismissed from the technical area."

The club said they would be raising these issues with the FA and the PGMOL separately.