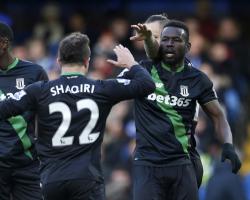 Chelsea appeared to be on their way to a fourth straight win - and about to leapfrog Stoke in the table - thanks to a memorable goal from youngster Bertrand Traore.

But in the 85th minute Diouf, who had missed two gilt-edged chances in the first half, made amends by taking advantage of a rare Thibaut Courtois slip to snatch a deserved point.

Traore , usually a midfielder, was asked to lead the Blues attack on only his second start with Diego Costa missing from the squad

Costa was ruled out due to an apparently minor tendon injury, with Wednesday's Champions League return against Paris Saint-Germain firmly in mind

The 20-year-old's initial touch took him away from goal, but with no Stoke player in a hurry to close him down he turned back inside and lashed a superb shot across Jack Butland from 20 yards.

Yet Stoke had been the better side for much of the first half, troubling Chelsea on the break time and again through Ibrahim Afellay and Xherdan Shaqiri

Diouf should have opened the scoring when Afellay raced down the left and curled an inviting pass behind the Blues' backline, but the Senegal international hooked his shot over,

And Diouf had his head in his hands against when Shaqiri burst along the opposite flank and whipped in another cross, this time the striker sending his volley crashing into the turf and bouncing wide

Stoke, like Chelsea on a run of three straight wins, looked for a way back into the match after the break and Shaqiri's low drive forced a smart save from Courtois

Chelsea had chances to make the game safe, however, with Butland saving well at his near post from Willian and keeping out substitute Ruben Loftus-Cheek, while Eden Hazard flashed a shot across goal and wide.

But with just five minutes remaining Stoke got their reward - although it was handed to them by Courtois.

Afellay robbed Willian in midfield and Bojan Krkic sent Shaqiri clear down the right to swing in another cross.

The normally-reliable Courtois opted to punch the ball, only to direct it straight onto the head of Diouf - and even he could not miss this time

The Stoke winger stuck to his task well and got his reward in the end when Courtois punched his cross onto the head of Diouf.

MOMENT OF THE MATCH

Traore momentarily looked at a loss as to what to do with the ball when he received it just outside the box, but he made the right choice with a thunderous strike.

VIEW FROM THE BENCH

Stoke patched up Cameron in a defence missing the likes of Ryan Shawcross and Glenn Johnson.

MOAN OF THE MATCH

Diouf may have grabbed the equaliser but Stoke desperately need a striker capable of regularly finishing off their fine build-up play.