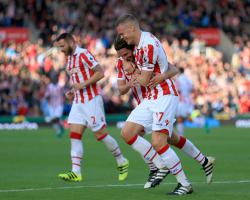 Allen had scored just five times in his previous three seasons for club and country, a total he has matched in his past four appearances, and he seems to be revitalised playing in a more advanced midfield position under Potters boss Mark Hughes.

"I don't really know where it's coming from," Allen told Stoke's official YouTube channel of his scoring streak.

"When you play off players like Wilf (Bony) and (Peter) Crouchy when he's come on, when you've got the quality of Marko (Arnautovic) on one wing and Shaq (Xherdan Shaqiri) on the other, you know if you get in the right positions every now and then something is going to drop for you and at the moment it seems to be falling for me."

Allen has settled quickly in Staffordshire after making a ÃÂ£13million switch from Liverpool during a summer where he helped Wales advance to the Euro 2016 semi-finals.

"I'm loving life at the minute," he added

I think you can see how much it's benefiting my football."

While Allen has started the season in fine fettle, it has taken his team until the eighth attempt to record a first Premier League success of the campaign.

They removed that monkey off their back against the listless Black Cats and will see the coming weeks as a perfect opportunity to move up the table with a run of games against Hull, Swansea, West Ham, Bournemouth, Watford and Burnley.

"The self-belief and confidence has never left the changing room," Allen said.

"We knew the quality we had in there

The performances we've shown, especially in the last couple of weeks, we knew it was just a matter of time

We've had to be patient, it's taken longer than we would have hoped to get the first win but I think people will start believing again that there's a few more to come."

Such confidence does not appear present in the Sunderland ranks given David Moyes is still waiting for his first league triumph since succeeding Sam Allardyce.

"Obviously we're looking for a win to give us a bit of momentum and something which we can start from," the Scot noted.

"That's the hard bit but if anything can give the players a lift it will be the supporters and the way they supported the team, especially in the second half

The supporters are sticking with the club and with the players."