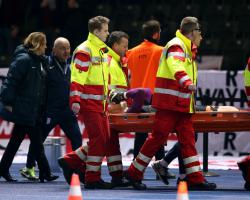 Butland sustained the injury towards the end of the first half of Saturday night's clash in Berlin and was carried off on a stretcher to be replaced by Fraser Forster.

The 23-year-old Butland took to social media on Sunday to confirm he is to have tests to determine the extent of the problem, tweeting: "T hank you for all your messages, I'll be having a scan today to see the damage to my ankle and will work hard to get back fit! thank you!"

Butland had the chance to put the ball into touch to receive treatment, but chose instead to punt itl down field, whereby Germany claimed possession and raced forward through Real Madrid midfielder Kroos, who beat Butland with a low 25-yard shot at his near post

Germany made it 2-0 just before the hour-mark, Mario Gomez heading past Forster, but England staged a stunning recovery with goals from Harry Kane, Jamie Vardy and Eric Dier sealing a dramatic 3-2 win

Butland added on Twitter: " Firstly, what a night to be involved in! an incredible and much deserved win against the World Cup winners, makes me proud to be English!

"But my nature to not give up was my downfall, the injury I'll recover from but more importantly the experience I'll learn from!"