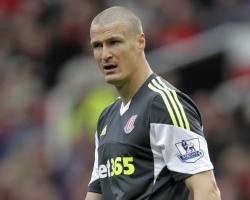 Huth had responded to a Twitter account which posts sexual images of individuals and asks users to guess their gender, and was found to be in breach of FA rules relating to comments which are indecent, improper, or bring the game into disrepute.

In addition to the two-match ban, Huth was fined ÃÂ£15,000 and ordered to complete a mandatory education course.

An FA statement said: "Robert Huth will serve a two-match suspension with immediate effect after he admitted breaching FA Rules in relation to comments he made on social media.

"The Stoke City defender was charged in relation to comments which were indecent and/or improper and/or brought the game into disrepute, contrary to FA Rule E3(1).

"Further to this, it was considered an "Aggravated Breach" as defined in Rule E3(2), as it included a reference to gender and/or gender reassignment."

Huth had apologised for interacting with a Twitter account which invited users of the social media site to guess from cropped photographs of people in explicit poses whether those pictured have male or female genitalia.

He deleted the tweets and posted a message saying: "Clearly no offence was meant or directed to anyone, but apologies if I've offended anyone."

He was charged by the FA on January 14.

In October the FA handed Rio Ferdinand a three-match suspension, as well as a ÃÂ£25,000 fine, for comments he made on Twitter, though that was not the QPR defender's first offence on social media.

Huth's ban could complicate efforts by Potters boss Mark Hughes to send the German out on loan before the transfer window closes on Monday.

Huth, a Potters player for more than five years, has made only one Barclays Premier League appearance since suffering a knee injury in November 2013.

Speaking on Thursday at his press conference to preview Saturday's trip to Leicester, Hughes said: "I've had discussions with Robert and I think it is fair to say he needs games.

"We are looking to try to get him that if we can.

"We want to get games into him so he is fit and ready for us."