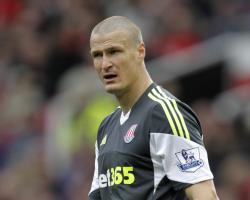 Huth, a Potters player for more than five years, has made only one Barclays Premier League appearance since suffering a knee injury in November 2013.

And the 30-year-old did not feature in the squad at all for last Sunday's 3-0 loss at Arsenal - a game which saw his fellow German centre-back Philipp Wollscheid, newly arrived at Stoke on loan, go straight into the first XI.

To add to Huth's situation, he was this week charged by the Football Association with aggravated misconduct in relation to comments he made on social media.

He very much seems headed for the Stoke exit door, although his manager has played down the suggestion there would be no way back for him at the Staffordshire outfit.

Speaking on Thursday at his press conference to preview Saturday's trip to Leicester, Hughes said: "I've had discussions with Robert and I think it is fair to say he needs games.

"We are looking to try to get him that if we can.

"We want to get games into him so he is fit and ready for us.

"Under-21 games probably are not the right environment for him as a senior player, so he needs to get out and play games of meaning.

"If we can find the right team for him, hopefully he'll get five or six games and then he can come back to us and be ready to go again."

The FA announced the news of Huth's charge on Wednesday and he has until 6pm on January 21 to respond to it.

Huth apologised earlier in January for participating in a game with a Twitter account which invited users of the social media site to guess from cropped photographs of people in explicit, sexual poses whether those pictured have male or female genitalia.

He deleted the tweets and posted a message saying: ''Clearly no offence was meant or directed to anyone, but apologies if I've offended anyone.''

Specifically regarding that matter, Hughes said: "There is an issue with social media and football players or any person in the public eye, and you have to be very careful.

"If you say anything or get involved in things that other people have an issue with, then there is a possibility you will get pulled up on it and the FA will get involved, and that is the situation we find ourselves in.

"Robert was very quickly mindful of people being upset about, so he apologised immediately, took the posts down and we hoped that would be the end of it.

"But obviously the FA has looked at it and think he needs to explain his actions, so I think that process is ongoing and we will see where it leads."

Meanwhile, Hughes has indicated he is looking at bringing a new wide man in during the current transfer window after winger Oussama Assaidi, who had been on a season-long loan from Liverpool, had that deal cut short and joined Dubai side Al Ahli.

Hughes has been linked with Tottenham's Aaron Lennon, and said of the England international: "I'm not sure about his situation, and the situation of players change in this month, it seems, on a daily basis.

"We'll look at opportunities and if they make sense to us, we have areas of the team we think we can improve if we can get the right players in.

"But for the time being we have to keep our cards close to our chest."

Hughes did dismiss talk of him trying to sign Manchester City striker Edin Dzeko, adding: "I can tell you straight - there would be interest if it was ever viable, but it is not one we could ever contemplate doing unfortunately."

Full-back Erik Pieters is a doubt but midfielder Steven Nzonzi looks set to be available for the Leicester contest after both came off at half time with groin complaints during the Arsenal match.

Victor Moses, the winger on loan from Chelsea, was an unused substitute in that game but looks set to make his return to action this weekend for what would be his first appearance since sustaining a thigh problem in November.