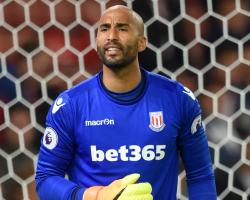 Hughes admitted he will be offered players constantly before next month's transfer deadline but, with cash available, will not blow the money on just anyone

He said: "We are constantly looking at opportunities and I am sure we will be getting calls in January

It isn't an easy window to navigate, I have said that before

That happened with Xherdan Shaqiri a couple of years ago

We want players who will make a major impact straight away rather than squad players."

The clubs are in talks over the on-loan goalkeeper, whose deal expires next month, but Hughes insists time is running out to do a deal for the 33-year-old.

The manager told a press conference: "We would like to get something done, but they are asking for too much money

We have a fee we feel he is worth - a market value - and we aren't going to be held to ransom.

"If it doesn't change soon then we will have to look at other options."

Grant will feature when Stoke host Leicester in the Premier League on Saturday after a clean sheet in Wednesday's 0-0 draw with Southampton.

Stoke are four points ahead of last season's surprise champions, who have picked up just one point from eight away games, but Hughes remains wary

"It's always difficult after winning the title and Leicester are finding that out," he said

You can see the ability they have - they will be fine

They will just be a little frustrated."