Hughes insists Leicester are not on the wane 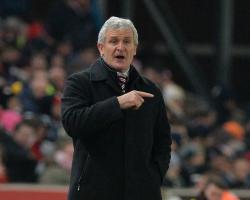 But they go into Saturday's top-flight home clash against Stoke having won only one of their last seven games in all competitions.

Meanwhile, their two attacking stars of the season, winger Riyad Mahrez and striker Jamie Vardy, have not scored a goal between them since December 19.

Hughes has no doubt that aspect has been key to Leicester producing fewer victories of late, but he does not see them as a side whose good work is now starting to unravel.

"At the moment they're on a little bit of a run where positive results in terms of wins are not forthcoming," Hughes said.

"But I wouldn't suggest for one moment they are on the wane or on the slide.

"Their goalscoring threat has come through Vardy and Mahrez, so there was always a danger that if they stopped scoring or the chances being created weren't as readily available, then maybe their ability to win games would lessen.

"That seems to be happening at the moment, but I've seen recent games and they look just as threatening as they have done.

"They've still got a real threat and we'll have to play really well against them to get a positive result."

Another significant player for Leicester this term has been defender Robert Huth, who joined from Stoke over the summer on a permanent deal following a loan spell last season.

Huth formed a fine Potters centre-back pairing with Ryan Shawcross over the years, but Hughes insists the German moving on - for an eventual reported fee of Â£3million - made sense for all parties.

"He's a very good defender and the way Leicester play, it's a perfect situation for him," Hughes said.

"He's a leader as well - I'm sure he's a huge influence, like he was here.

"Unfortunately in his time here (since Hughes was appointed as boss in 2013) for the most part he was injured and when he came back, he struggled to break through.

"He wanted to play and I allowed him to go to Leicester.

We got decent money for him, and he was able to get on with his career."

Seventh-placed Stoke, now with Philipp Wollscheid as the regular partner for Shawcross, have the fifth-best defensive record in the league at the moment.

And Hughes added: "The partnership between Ryan and Robert was really strong, but the team has evolved slightly and Philipp has formed a different partnership with Ryan that still functions and works well.

"We're really pleased with what they're both producing."