Hughes hits out over ref decisions 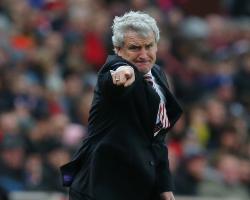 United stretched their unbeaten run to 10 matches thanks to Radamel Falcao's equaliser, but in truth they were lucky to come away from their 1-1 New Year's Day encounter in Staffordshire with a point.

Mame Biram Diouf missed a good chance to double Stoke's lead just after Ryan Shawcross opened the scoring and Peter Crouch hit a post in the second half as the Potters came agonisingly close to what would have been just their second league victory over United since 1984.

Hughes was angry that Oliver did not notice Geoff Cameron was blocked as he followed up Crouch's header and the Stoke boss was also unhappy that the referee did not give a penalty when Chris Smalling handballed in his own area.

The blustery conditions reflected Hughes' mood during the match

He yelled at the referee on several occasions from the edge of his technical area and he was still clearly unhappy with the referee's performance after the match.

"We had two clear penalties that should have been given," the Stoke manager said

"The referee is standing four or five yards away

Why he hasn't given it, I don't know.

"I haven't spoke to the ref about it

It's a waste of time.

"He will no doubt say the lad couldn't get out of the way because he was too close maybe but I don't think that was the case.

"And when we hit the post from Peter's header it's come back out and Geoff Cameron has been taken out, he was waiting to put the ball over the line and was taken out.

"From our point of view they were two clear-cut penalties."

Oliver infuriated Potters fans the last time he managed at the Britannia Stadium in October, when he gave a penalty to Swansea after Shawcross grappled with Wilfried Bony

Manchester United boss Louis van Gaal insisted Oliver made the right call by not punishing Smalling, even though his left arm was out-stretched when the ball struck it in the 65th minute.

"Was he off-balance or not? That can also be why his hand is in the air."

United dominated possession for large parts, but they were unable to hurt Stoke

Their build-up play was laboured at times and they tried too many complicated manoeuvres which did not come off because of the tricky, wintery conditions.

Van Gaal admitted his team were lucky to get a point from their trip to Staffordshire.

"I think they deserved the victory more," the Dutchman said.

"I cannot say that we were the better team.

"It was a big disappointment to concede so early.

"We need to pass the ball quicker and today the crosses were not so good.

"Okay, the circumstances are not like they always are but you have to adapt, if you are a better player you adapt."

Van Gaal's problems were compounded by a hamstring injury to Ashley Young.

The former Aston Villa man has excelled at wing-back in recent weeks, but he looks set to miss United's next four games because of the injury, which he suffered in the second half.

"He has a hamstring injury," Van Gaal said

" He is out for four weeks out, I think

"We'll have to wait and see for sure because I am not a doctor, but I imagine it will be something like that."