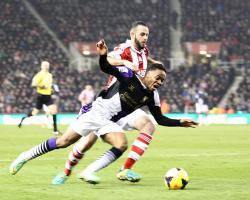 Having trailed 2-0 to Ryan Shawcross' own goal and Luis Suarez's 21st of the season, the Potters hauled themselves level at half-time through two former Reds Peter Crouch and Charlie Adam.

However, Hughes felt Sterling went down under minimal contact from Marc Wilson to win a spot-kick which Steven Gerrard converted.

Suarez added his second, Jon Walters replied before Daniel Sturridge ended a seven-week spell out with an ankle sprain to add the fifth right at the end.

"Soft, easy - any adjective you like really," said Hughes of the penalty.

"When players go down in the box the referee is going to have difficult decisions, we all know that, but I don't know whether that penalty would've been given at the other end.

"The reaction of the player himself, he immediately looks towards the referee, is a give-away and the fact there are about 3,000 Liverpool fans behind that goal as well reacting to it means unfortunately the referee has bought it and it's a poor decision.

"There was a hint of handball (by Sterling) and he has been given the benefit of the doubt.

"Given that we had come back from 2-0 down in the first half and got back on level terms I thought the momentum was with us and half-time came at a bad time as we were very much in the ascendency.

"Almost immediately the game is taken away from us once again. We had to show real character and determination to pick ourselves up from so many set-backs.

"I thought in terms of the performance I was really pleased but in key moments, and when you need things to go well for you you need to do the correct things at the right time they went against us.

"We needed to deal with key moments better defensively and we conceded a penalty and an own goal with a shot which was heading for the corner flag.

"It was a difficult day in terms of what went against us but I thought we showed real determination to keep on going because that augurs well for big games coming up."

Liverpool manager Brendan Rodgers insisted Sterling was not the type of player to dive and rejected suggestions the 19-year-old could earn himself an unwanted reputation like a number of other Premier League players.

"I don't think he's in that bracket. Goodness me he is a young boy who gets kicked left, right and centre and we got good fortune," he said.

"The defender doesn't make contact with the ball but does the man and Raheem is running at such speed.

"He is a fearsome competitor and he is not that type. He has had many decisions gone against him in his young career, ones where he has had dead-cert penalties.

"I don't think he has gone down easily. Contact was minimal but the pace he is going at puts him over."

Rodgers was delighted to see Suarez and Sturridge resume their formidable partnership, which produces a goal from one or the other every 56 minutes on average, to lift his side back into the top four.

"Daniel has pace and power on the counter-attack and both combined very well," he added after the Reds' first league win at Stoke in just over 29 years.

"Both are outstanding talents - you can see that from their link-up for both Luis' second goal and Dan's movement for Luis to play him in (for the final goal) was exceptional in such a short space.

"Sturridge showed great skill and awareness to get up and have two touches to finish the game (after Jack Butland had brilliantly stopped his initial effort).

"To get the fifth goal here really shows that threat we have."