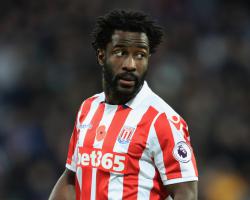 Bony, 27, is on a season-long contract from Hughes' old club Manchester City and has so far scored twice in 10 appearances.

The striker is bidding to rebuild his reputation in England after following a goal-laden spell at Swansea with a frustrating period at his parent club, though it has emerged that the option to further his career in China, where Graziano Pelle, Ramires and Demba Ba ply their trade, could be on the table in the new year.

The Telegraph's report that City inserted a section in Bony's Stoke deal which stated that he could be transferred to a Chinese Super League side when their window reopens was stood up by Hughes, who expects his loanee to shun any lucrative offer from abroad.

"I think that may well be true, but a lot of things have come to the fore to make that happen, not least that Wilf needs to want to go himself," Hughes said.

"I don't think he will want to

I think he sees himself very much as a Premier League player this year and in the years to follow.

"Any thoughts of moving to other shores would be dependent on whether or not he had a desire to do that.

"Clearly, if his club thought it was a good deal they would try and influence that but I don't anticipate that happening, certainly not in January.

"There seems to be significant amounts of money being banded about (in China), but I would suggest Wilf's not too short of a few quid to be perfectly honest.

"In terms of Wilf, I think he's more focused on continuing his career in the Premier League with us, so unless he comes and knocks on my door and says he's had an offer...I'd be very surprised."

Hughes also confirmed that there was no stipulation where Stoke have agreed to pay a set fee for Bony during, or at the end of, his temporary stay.

"We're not thinking on those terms at the moment," the Welshman added.

It's not something that's in the contract, we haven't got a price that's been agreed, sometimes you can do that but that's clearly not what Man City wanted."

Bony is expected to lead the line against Watford on Sunday, but a suspension to Joe Allen and injuries have left Hughes short in the midfield department.

Glenn Whelan remains a doubt with a calf problem, Geoff Cameron is missing because of a knee issue and a problem in the same area will keep full-back Phil Bardsley out for a number of weeks.