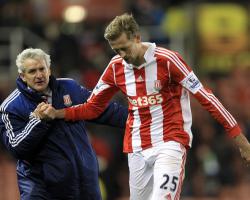 Reports have linked Crouch with a possible move back to his old club QPR and a reunion with their manager Harry Redknapp, who the 32-year-old has played under at various different points in his career.

But asked on Friday whether he would consider letting Crouch go, Hughes said: "No, it is not an option."

Trying to boost Stoke's attack has been a key focus for Hughes during the current transfer window, in which he has already recruited Manchester City's John Guidetti on loan.

Fellow striker Juan Agudelo has also joined, although is spending time on loan with FC Utrecht while the Potters try to secure a work permit for him, and midfielder Stephen Ireland has signed a permanent deal at the Britannia Stadium as well, having previously been borrowed from Aston Villa.

But Hughes - who says Croatia striker Nikica Jelavic, recently transferred from Everton to Hull, was not a player he had pursued - has been frustrated overall by how things have gone in January so far with regard to Stoke's efforts in the transfer market.

He said: "There was a point where we thought there was a possibility of doing our business quite early, but that hasn't panned out, and we have missed out on a number.

"We have probably been misled somewhat on others as well - in terms of the information we are getting and the plans for certain players.

"You have to shrug your shoulders and move on. It is about making sure at the end of the window, we are stronger than we were at the beginning."

It seems Sunderland's Lee Cattermole may have been a target, but that the prospect the midfielder now has of playing in the Capital One Cup final has seriously reduced any chance of him leaving the Wearsiders.

Asked about Cattermole, Hughes said: "I think, given that Sunderland had a fantastic result the other night - I was there at the game (Sunderland's semi-final second leg at Manchester United), and they played exceptionally well and the player you have mentioned played really well - it is highly unlikely that one will happen."