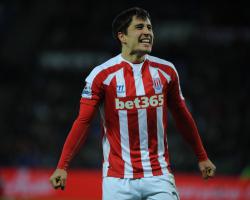 Liverpool are being strongly linked with a move for the former Barcelona youngster after his recent run of form.

Rumours of their interest were initially flaky but talk of an approach for the 24-year-old has gathered steam this week, with Reds boss Brendan Rodgers perhaps looking to bolster his sometimes meagre forward line.

However, Hughes was quick to dismiss such talk ahead of Monday's FA Cup fourth-round trip to Rochdale.

We knew it would take a little bit of time for him to get to grips with the Premier League and he's done that.

He's a talented football player and I think he's proving that in the Premier League.

"At this stage of his career that he's had disappointments such as being sent out on loan by Barcelona, the disappointments he had in terms of his game time and maybe how he was treated in certain situations.

"So he's come here and really embraced what we're doing and I think he's enjoying the environment that we can give him.

We have no intention of encouraging any interest in him

He's a big part of what we want to do, moving forward, so it's a non-story."

Hughes took his players for warm-weather training in Dubai this week before returning on Friday.

"It was very good," he said

"We got there at just the right time, given the weather we left behind here.

"We enjoyed it and got some good work done."

Potters captain Ryan Shawcross is a major doubt for Monday's game due to a groin injury.

The centre-half has not trained so far this week and while he is likely to do so this weekend, Hughes is unlikely to risk him.

Forward Jonathan Walters is Hughes' only other doubt, with a minor back problem.