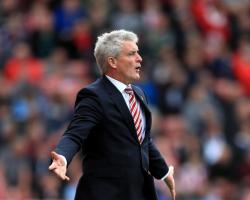 Rondon's header at the death, cancelling out Joe Allen's 73rd-minute finish, denied the Potters what would have been their first Premier League win of the season.

Boss Hughes admitted afterwards it felt like his men had suffered another defeat to add to those from their previous four league matches.

But he also acknowledged the losing streak being over and Stoke moving off the bottom of the table - up one place, with two points from six games - were positive things, and stressed the performance had been encouraging.

"I thought we'd done more than enough to merit three points to be honest," Hughes said.

You do the right things for the most part and then you can still lose.

"That is how it feels at the moment

We have to remind ourselves it is actually a well-earned draw.

"Premier League points are hard to attain and we've been able to acquire one, so we have to take that from the game - but, clearly, at the moment it's a little bit raw.

"We think we certainly deserved the three points

It wasn't to be, but I was pleased with the performance.

"We are where we are the moment

We're off bottom, so that's a positive

We have Manchester United away next week, so we'll have to do it then."

For West Brom's ex-Stoke boss Tony Pulis - the predecessor at the Staffordshire outfit to Hughes - this was a 1,000th game as a manager.

Pulis received a warm reception from all sides of the Bet365 Stadium as he emerged from the tunnel just before kick-off.

And he said after the match: "You couldn't have picked a better place for me to get to 1,000 games.

"The place is wonderful

The crowd were absolutely fantastic to me as a manager here.

"It has been stitched into my body, this football club, in lots of respects

It is always a result I look for, and the Coates family (who own the club) are wonderful people and I'll always have respect for them."

On his side's efforts, he added: "We knew it was going to be tough - they are fighting for their lives.

I would have been really disappointed if we'd lost."

Stoke captain Ryan Shawcross, who was brought to the club in 2007 by Pulis and played under him there for six years, was booked in the first half after he appeared to lead with his arm in a challenge on Gareth McAuley.

And when asked if Shawcross had been lucky to stay on the pitch following the incident, Pulis said: "Gareth actually heads the side of his shoulder

He doesn't hit him with his elbow

So no blame to Ryan at all."

Hughes, meanwhile, was non-committal when asked for his opinion on two separate incidents in which Stoke's Erik Pieters went down in the West Brom box under the attentions of Matt Phillips and had his appeals for a penalty waved away by referee Martin Atkinson.